View Scoreboard
Leaders
First Round â€“ Don Bies birdied the final two holes for a four-under par 68 and held a one-stroke lead over Hubert Green who bogeyed the 18th. Gibby Gilbert double-bogeyed l7 for a 70. Second Round â€“ Hubert Green, with an even par 72, took the lead at three-under par l41 with Roger Maltbie at 71- 71=142. Rod Funseth birdied five of the first six holes on the back side for a 31 and a 67 to tie with Bies at 143. Third Round â€“ Maltbie added a two-under par 70 for a four-under par 212 and a two-stroke lead over Bies and three over Funseth.
Notes 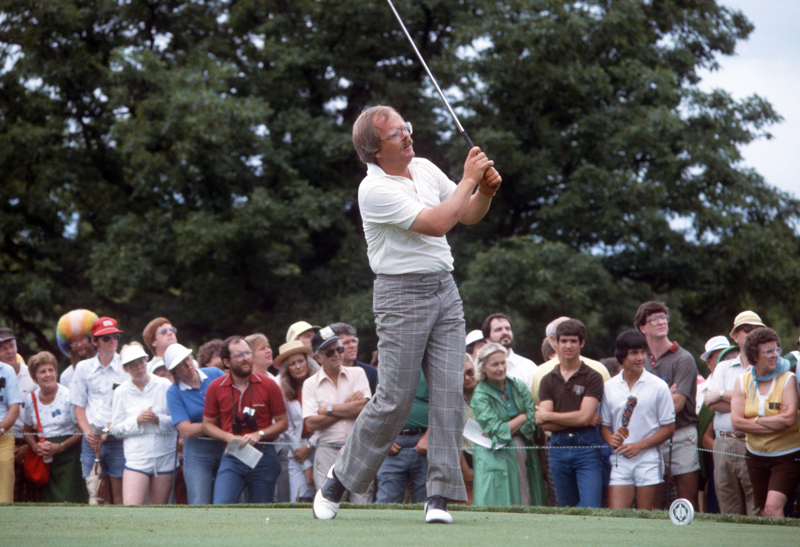 MALTBIE STAKED HIMSELF TO A PIECE OF HISTORY

An amazing stroke of luck at the first Memorial Tournament

The taciturn Irwin, absorbed by his intense competitive instincts, barely mumbled as he accepted the salutation.

The two men were set to embark on an unprecedented three-hole aggregate-score play-off for the first Memorial Tournament title. Maltbie, only in his second season on the PGA TOUR in 1976, knew he was the underdog, believed Irwin was the crowd favorite, and sensed that Irwin was irritated to be playing extra holes when he could have won Jack Nicklaus' regal new event in regulation.

Perplexed by his opponent's brusqueness, Maltbie shuffled back to his golf bag After an awkward few seconds, his caddie, Jeff Burrell, leaned over and whispered, "How about that? He thinks he's going to win."

Maltbie, the 1975 PGA TOUR Rookie of the Year, began to laugh.

"That helped me to relax," he says, recalling what proved to be a galvanizing moment on that memorable overcast Sunday in late May 37 years ago. "I mean, I was nervous. Hale had the record and the reputation, and we were playing this great new event on one of the finest courses we ever encountered. It wasn't just another week, and you knew it."

By day's end, everyone else knew it, too.

The two men, who completed 72 holes at even-par 288, traded birdies and pars at 15 and 16 respectively, essentially turning the playoff into sudden-death at the par-4 17th. Maltbie's fate appeared sealed when he hooked his 4-iron approach from 186 yards well to the left of the green.

Miraculously, however, his ball caromed off a gallery stake and onto the putting surface, 15 feet from the hole, from where he two-putted for par. But Maltbie still figured he was beaten with Irwin stalking a 10-footer for birdie. He removed his glove and handed it to Burrell, saying, "He isn't Hale Irwin because he misses these."

But Irwin, clearly perturbed by Maltbie's good fortune, missed the putt. Then, on the fourth extra hole, Irwin used up four strokes and broke his 5-iron on the way to the 18th green. He never holed out because Maltbie sank and 18-foot birdie putt for his third career victory, worth $40,000.

In the aftermath, a tournament volunteer retrieved the stake and gave it to Maltbie, who proudly displayed it for the media. Then he stuffed it in his golf bag as a keepsake, but, alas, didn't keep it for long. At the next stop, the Kemper Open, then held in Charlotte, North Carolina, Maltbie left it behind under his hotel room bed.

"Given my track record, that shouldn't be a surprise," Maltbie says with a laugh, referring to an episode a year earlier when he left his $40,000 winner's check from the Pleasant Valley Classic on a barroom floor in Worchester, Massachusetts.

A five-time winner with more than $2.2 million in earnings, Maltbie, 50, changed tracks after two operations on his left shoulder. Since 1991, his golf acumen and gregarious nature have served him - and television viewers - well as a broadcaster for NBC's golf coverage.

A golfer since age eight, when his father, Lin, introduced him to the game at San Jose Country Club, Maltbie had no qualms relinquishing his identity as a tournament player.

"At the end of 1994, when NBC won the rights to the USGA package, I asked myself, "Am I really going to do this full time?" Then I thought, if I was going to be the next Jack Nicklaus, I'd have done that by now," Maltbie says, "I was 43 and on the short end of my career.

"I thought there may come a time when I might regret it, but I've never wished to play more," he adds. "Live TV provides many of the same challenges and rewards as professional golf. You only get one chance to do something; there are no mulligans. When you get it right, it's like hitting one on the screws. When you screw up, you have to go on. You find these parallels. The things I love about golf I get out of broadcasting."

Maltbie, who lives with his wife, Donna, and two children in Los Gatos, California, intends to compete sparingly on the Senior PGA TOUR, solely for nostalgia's sake.

"The Senior TOUR is for fun; it's not the tour of dreams," he says. "The PGA TOUR is for dreams."

Twenty-five years ago, one of his dreams came true. He staked himself to a piece of history.

"From a satisfaction standpoint, the Memorial Tournament stands at the top of the list," says Maltbie, who joins the host as the only two players to compete in every Memorial. "It's been long remembered for how I won it, and that makes it really special. The older I get, the more special it becomes."

David S. Shedloski, of Alexandria, Ohio, is an author and award-winning golf writer.