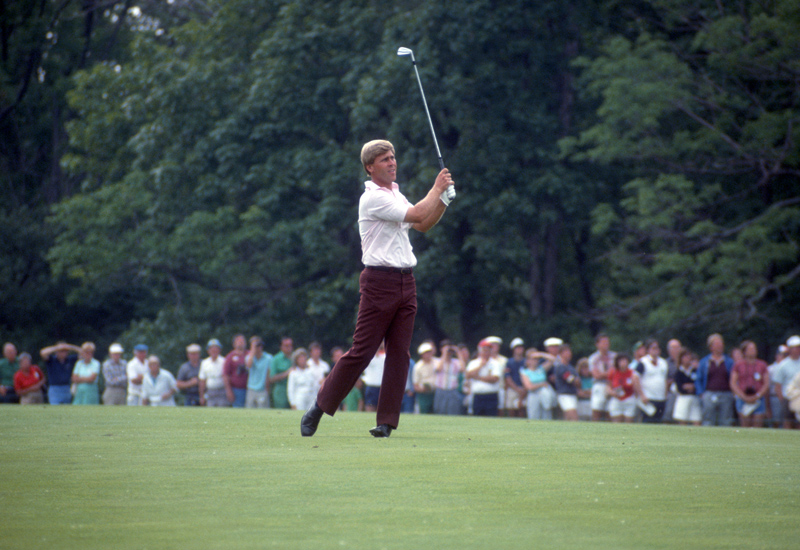 So, statistics are boring. But what better way to summarize the par-smashing explosion that left Memorial Tournament scoring records in a shambles? You start with Louisiana's Hal Sutton, who obliterated the former championship record by NINE strokes with a 17-under par 271 (mocking the 280's posted by David Graham in 1980 and Jack Nicklaus and Andy Bean in 1984).

Host/course designer Jack Nicklaus provided a new line for the record book too, firing six straight birdies in Sunday's final round (10 through 15), one more than the previous best. This shocking assault on proud Muirfield (No. 6 in Golf Digest's 1986 listing of "America's 100 Greatest Courses") resulted from a combination of factors: (1) pre-Tournament rains that left the course soft and the greens more vulnerable: (2) little or no wind - a sharp contrast to other years; and (3) perpetuating the tradition of other years, a superbly groomed course that rewarded artful strokes.

"I don't think that record (Sutton's 271) will be broken for a long time, "suggested Nicklaus. "I just don't think you're going to have four days (of scoring conditions) like that again for a long time," adding that as in the past, there would be a least one day "where the wind would practically blow everybody off the course" and the tournament scoring average would balloon.

"It's the best golf I've ever played, from start to finish; the best tournament I've ever had," Sutton decided. "I made a bogey here and there and I even made double bogey on the ninth hole the first round, but there never were any real lapses. I hit 17, 14, 15 and 15 greens." Sutton entered the final round with a three-stroke lead over Pooley, Dan Halldorson and Doug Tewell and simply refused to back off. His advantage never dipped below two and stood at three through the final nine, despite bogeys on Nos. 14 and 16.

Nicklaus injected great excitement with his string of six birdies, starting at No. 10. It seemed a case of deja vu - another magnificent down-the-stretch victory march a la the Masters. The huge gallery, roaring in mounting frenzy with each disappearing putt, thought so. But Sutton handled the pressure. The Golden Bear's streak still left him four strokes back and a bogey-bogey-bogey finish dropped him into a fifth-place tie with John Mahaffey at 277.

Of his triumph, the 28-year-old Sutton said, "anybody would want their name on that trophy. It's Jack's tournament and that makes it even more important. I would say it was a big win for me at this time in my life."

The day's more spectacular eagle, however, belonged to Halldorson. On No. 14, he drove into the rough, selected a 9-iron for the 125-yard shot and sent the ball toward the green. "At first it looked like it would catch the front bunker," he related, "then it looked like it would go into the back bunker. But then it lost its steam and came back down sideways and ker-plunk! "

Halldorson had been the first round leader with a 65 (the Memorial's best first-day total ever) that included no eagles, but a record-tying nine birdies. Nicklaus' lowest opening round in 11 Memorials, 66, shared second with Tewell and Peter Jacobsen. There were 17 within four strokes of the leaders.