Third Round
Couples, after shooting 67, was at 14-under-par 204, three strokes ahead of Love. 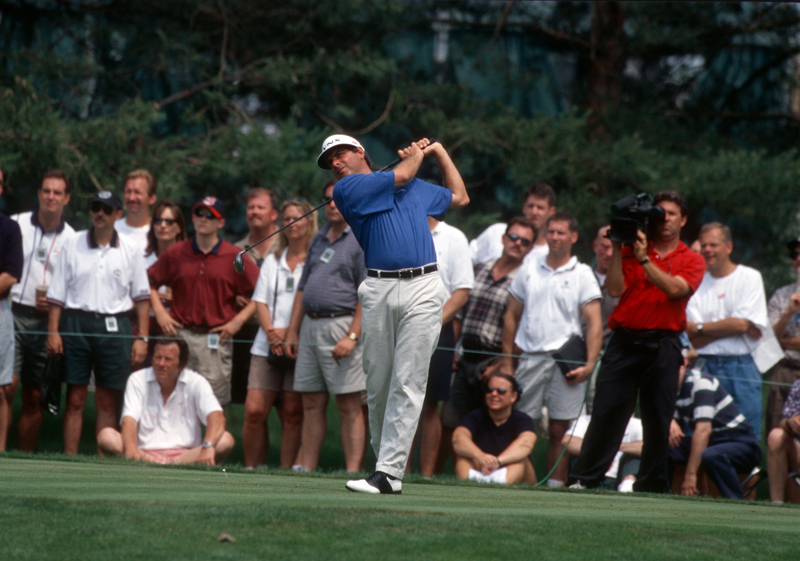 The 1998 Memorial Tournament field had people talking about which one of the "terrific 20-some-things" would add his name to the list of marquee golfers who have won Jack Nicklaus' event. All five, Ernie Els, Tiger Woods, David Duval, Justin Leonard and Phil Mickelson, had at least one win heading into the Memorial and were ranked among the top 10 golfers in the world. Tom Watson called them "the best generation of golfers in a long time," and Tom Lehman observed that veterans like himself had better "kick it up a notch or quit".

They had come together only three times previously during the 1998 season, at the Mercedes Championships, the Players Championship and the Masters. Mickelson had won the Mercedes and Leonard the Players, and all five finished among the top 16 at the Masters. A "name" player had joined the club of Memorial winners when the tournament ended, but it wasn't one of the young guns. Instead, it was a wiser Fred Couples, who, despite an aching back, had been making the game look easy well before Els was tabbed the "Big Easy".

Couples sailed his way to victory by four strokes over Andrew Magee with four consecutive rounds in the 60s. Couples held at least a share of the lead for the last three rounds, and his 72-hole total of 17-under-par 271 equaled the third lowest in the history of the tournament. It matched Hal Sutton's score in 1986 and came up short only of Tom Lehman's 268 in 1994 and Greg Norman's 269 in 1995. Chronic back problems have resulted in Couples bringing along his personal physical therapist, Tom Boers, to each event.

Ironically, though, it was another of Boers' clients, Davis Love III, who was on top of the leaderboard after the first round. Love shot a six-under-par 66 to share the lead with Steve Pate, Trevor Dodds and Joey Sindelar. Love had been playing with hip and foot problems for at least three years, and his back flared during the spring. The Memorial was only his third event since the Masters. Love said he was tentative on a couple of shots he had to power into, but there were not many of those required on a warm, breezy day that made for dry and fast conditions. Love reached all four par-5 holes in two, and he wasn't alone in enjoying that advantage.

"It's a beautiful day to be playing golf, and a beautiful course to be playing on," said perennial Memorial contender Payne Stewart, who, like Love, did not have a bogey in his round. "You have three par 5s that are accessible, and with it playing fast, you hit shorter irons into the greens than we have in the past."

As others seemed to be sailing through Muirfield with "ease", Couples trudged on with four bogeys, three of them came on the first five holes, but finished the day one only two strokes off the lead. Despite a stretch run of four birdies, and eagles at 11 and 15, he did not sound optimistic about the next day. "I'm closer to hurting myself than I am closer to feeling better," he said. Couples, following a few sessions with Boers, began the second round with birdies at three of the first five holes. He finished with seven in all, and shot a 67 that gave him a share of the lead with Len Mattiace at nine-under-par 135. Mattiace also shot 67. They were one stroke ahead of Mark Calcavecchia and TOUR rookie Harrison Frazar.

None of the first round co-leaders broke par and all fell back. Couples said his early-morning tee time for the second round was more to his liking. He hit nothing more stout than a 6-iron into any of his birdie holes, and capped his round by birdie-ing the uphill, dogleg 18th after hitting a 2-iron off the tee and a 7-iron in. He holed the putt from 15 feet. The threat of severe weather suspended play at 5 p.m. with 30 players still on the course. After half an hour of thunder, lightning and rain, the course was playable again at 7:27 p.m., but that wasn't enough for the final threesome, which was on the 17th hole when darkness ended play for the day. Consequently, the cut did not come until the trio finished their round Saturday morning, eliminating, among others, Scott Hoch, who had played during the weekend in all 17 of his previous Memorials, a tournament record.

Couples meanwhile, woke up Saturday at noon with a pounding migraine. "On the range, I felt terrible. When I got to the first tee, I felt worse," Couples recalled. Not enough to make a difference.

"You always watch the sick guys," Love said. Thanks to a backside score of 31, Love shot his second 66 of the tournament in the third round to stand alone in second place. But it still left him three strokes behind Couples, who wandered his way to another 67 and completed 54 holes at 14-under-par 202. After a bogey at number 2, Couples birdied four holes and eagled the 15th for the second time in three days. Nearly an inch of rain that fell during two thunderstorms late Friday softened Muirfield's slick surfaces to the point that 31 players broke 70 in the third round.

The field's scoring average of 70.056 was only the fifth time in the tournament's 23 years that 71 was bettered. Tied for third, a stroke behind Love and four behind Couples, were Els, Magee and Ted Tryba. David Duval shot a 67 despite a double-bogey at number 18 to move five shots off the lead. Len Mattiace shot a 73 to fall to a tie for seventh. Love, who was Couples' partner when they represented the United States in four World Cup events, said he expected it would be difficult to catch his friend in the final round.

"He's just been waiting for a week when everything comes together."

"I had a lot going on last year. I didn't practice a whole lot, but I'm to the point now where, physically, I feel great," Couples said. And there was no reason for any discomfort during the final round, except for the question of whether another storm would beat Couples to the clubhouse. It did not, although the threat of lightning forced late-afternoon suspensions that delayed the scheduled finish by about 90 minutes. Magee birdied two of his first three holes, and, when Couples bogeyed the second, the gap between them was only a stroke.

But that was as tight as it got for Couples. He rebuilt the advantage to four strokes with birdies on the two par-5 holes on the front side, led by five at the turn, and despite the two suspensions of play, was never less than three shots ahead throughout the back nine, where he also birdied both of the par 5s. He finished with a 69, bettering 70 for the fourth day in a row, for a 271 that was four strokes lower than Magee's total. Duval was third at 276 after a 69, and Jim Furyk fourth after a 68. Love shot 73 to tie for fifth.

Couples said that it only hurt him not to come back and that winning "on Jack's course, Jack's tournament, it means a lot. Next to Augusta, this is it for me." He promised that he would have no problem returning to Muirfield Village Golf Club. Now, he said, you won't be able to keep him away. "I will be back here every year," he said. "I am thrilled to win here."