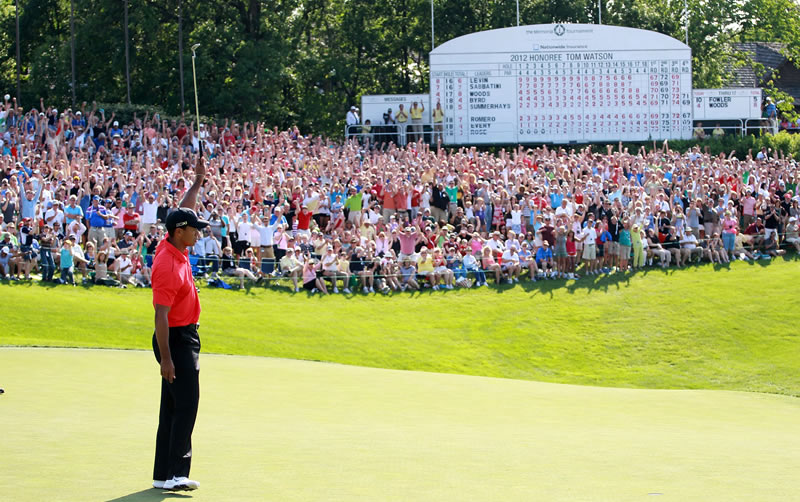 Woods 2012 Victory One for the Record Books

Jack Nicklaus wasn’t surprised that Tiger Woods matched him for career wins on the PGA TOUR. The manner in which Woods achieved it, however, was quite an eye-opener, even for the Golden Bear.

With a magical flop shot from behind the green on the 16th hole that Nicklaus called, "the most unbelievable, gutsy shot I’ve ever seen," Woods birdied three of the final four holes and captured his fifth victory in the Memorial Tournament presented by Nationwide Insurance.

The victory was Woods’s 73rd on the PGA TOUR, tying Nicklaus for second all-time behind Sam Snead’s 82 wins.

"He had to rub it in my face right here, didn’t he?" Nicklaus quipped, laughing. "No, if he's going to do it, which he was obviously going to, I'd like to see it happen here. And the way he did it, you know, he just played great."

The way he did it was familiar to those who have watched Woods regularly pull off uncanny shots. This time it was a 50-foot flop from behind the 16th green. Trailing by two strokes at the time, Woods assessed a scruffy lie in thick rough after knocking a 7-iron over the green at the recently redesigned par-3. Without regard to the water hazard beyond the hole, Woods took a huge swipe at the ball, watched it land softly and then track towards the cup. When it went in, Woods unleashed a muscular fist-pump as the gallery whooped and roared.

"It’s one of the hardest ones I’ve pulled off," Woods, 36, conceded after his second win of the season. "The shot was really difficult, but it wouldn't have been so bad if I had a good lie. The lie was just a little bit marginal where it brought water into play. I went for it. I pulled it off, and for it to land as soft as it did was kind of a surprise because it was baked out and it was also downhill running away from me. It just fell in. I didn't think it was going to get there at one point.  Kind of like 16 at Augusta, I thought I was going to leave it short somehow, and then it fell in."

Playing partner Rickie Fowler, who struggled to an 84 Sunday, also was reminded of the shot Woods holed at 16 at Augusta National GC on the way to winning the 2005 Masters.

"He had obviously a shot that, I guess not lucky, but you hit a good shot to get it inside 10 feet, and it came out perfect, landed kind of right on the crown of that ridge there, and the rest is history," said playing partner Rickie Fowler, who fell out of contention with an 84. "He loves being in the moment, and that's where he kind of gets down, focuses and hits those shots. He hit a perfect shot, and it was the perfect time to do it."

Woods started the day four strokes behind Spencer Levin, but he wound up with a two-stroke victory over Andres Romero and Rory Sabbatini. Romero matched Woods for low round of the day with a 67. Sabbatini shot 72. Levin, seeking his first win on the PGA TOUR, ended up tied for fourth after a 75.