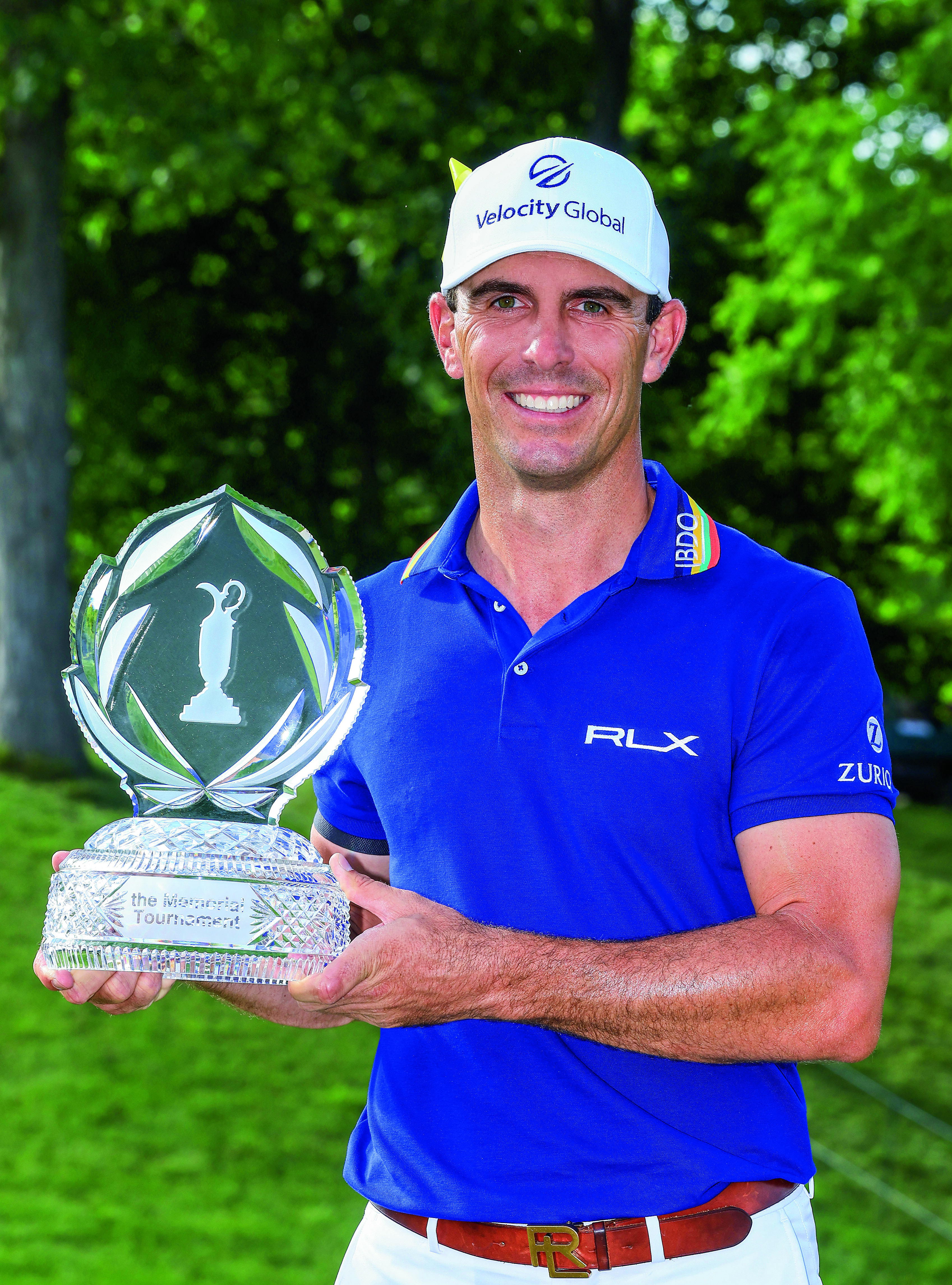 Billy Horschel ended any doubt about his victory at Muirfield Village with an eagle putt from one end of the green to the other on the 15th hole, sending him to a four-shot victory Sunday at the Memorial Tournament presented by Workday.

Horschel was staked to a five-shot lead at the start of a sun-soaked final round and no one ever got closer than two shots. He closed with an even-par 72.

Horschel moved to No. 10 in the FedExCup standings after earning a whopping 550 points.

There still a few nervous moments.

Horschel's streak of 49 consecutive holes without a bogey ended on the sixth hole. He didn't make his first birdie until the 10th hole. He had to scramble for bogey on the par-3 12th that dropped his lead to two over Aaron Wise.

Before the long eagle, Horschel saved himself with par putts of 12 feet on the 13th hole and 8 feet on 14.

And then it was over. From the front of the green on the par-5 15th, Horschel's putt from just inside 55 feet had the perfect line and perfect speed, bending left and dropping in the left side of the cup as he stretched out both arms in a quiet, disbelieving celebration.

“Just like you, big man,” Horschel said to tournament host Jack Nicklaus when it was over.

His lead was up to four shots, and it was a comfortable finish. Horschel finished at 13-under 275 and won $2.16 million, the largest paycheck of his career. As an elevated event, the win comes with a three-year PGA TOUR exemption.

Horschel said he has learned from Tiger Woods and Nicklaus that he didn't need to do anything special with a five-shot lead unless the moment called for it. It was calling on the 15th hole after Wise stuffed a wedge into 2 feet for birdie.

“If I had to do something special, I was ready for it,” he said. “Making that was huge.”

Wise did what he could in a final round so difficult that no one shot better than 69. He and Joaquin Niemann were the only players to apply any serious pressure on Horschel. He opened the back nine with a pair of birdies sand saved par from the back bunker on the 12th. But he dropped a shot on the 13th just as Horschel was looking shaky.

Wise made a bogey on the final hole for a 71 to finish alone in second.

Cameron Smith, who had the 36-hole lead, also started five shots behind. He had a pair of double bogeys for a 42 on the front nine and was never a factor.

Niemann, who won another elevated event at Riviera in The Genesis Invitational, made a strong move and was creeping within range until his wedge on the 14th found a bunker, leading to double bogey. He answered with two birdies, finished with a double bogey and shot 71. He tied for third with defending champion Patrick Cantlay (71).

Before the handshake with Nicklaus, Horschel was mobbed by his three children. He now has seven PGA TOUR victories. His wife has watched him win. His parents have seen him win. This was the first time his children were there, and they were bouncing on the firm greens.

That might have been as great as any pressure as Horschel felt.

“Having a five-shot lead, knowing it was mine to win, I really wanted to get the monkey off my back,” he said of winning with his kids in attendance.

Horschel moves to just outside the top 10 in the world, the highest he has ever been, thanks to a year that finally has brought some consistency in a hit-and-miss game. He has three victories in the last 15 months, all of them against strong fields — the World Golf Championships-Dell Technologies Match Play and the BMW PGA Championship at Wentworth last year, and now this.

It might even be enough to finally be considered for a U.S. team with the Presidents Cup later this year.