View Scoreboard
Leaders
First Round â€“ Bobby Wadkins, with seven-under 29 on the back nine, tied Mark Lye at four-under 68, two ahead of Bruce Lietzke, Jerry McGee, Gary Player and Chi Chi Rodriguez. Second Round â€“ McGee and Player were tied at six-under l38, with Fuzzy Zoeller at l39. Third Round â€“ Wadkins, with a 69, moved into a one-stroke lead at 209, with Nicklaus at 210 and Mark Lye 211.
Notes

Weather: Thursday and Friday hot and humid, with little wind. Saturday, hot with wind picking up in afternoon. Sunday, hot and cloudy. There was a 20-minute delay due to threat of lightning at 3p.m. to 3:20 p.m. Suspended again at 4:10, and play resumed at 6:30. Suspended a third time at 7:39 with 10 players on course. Play did not resume until 9 a.m., Monday. 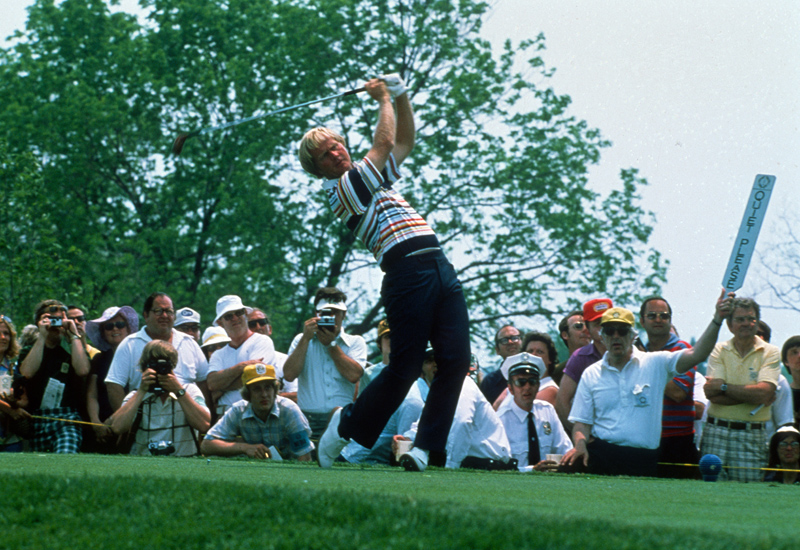 Eyebrows raised when Jack Nicklaus proclaimed winning the second annual Memorial Tournament "my biggest thrill in golf." One national magazine writer, in fact, began his tournament report thusly: "It is inconceivable that Jack Nicklaus, in a rational moment, would say that winning the Memorial Tournament is a greater thrill than beating Arnold Palmer for his first U.S. Open title, or winning the British open at St . Andrews . . . beating Ben Hogan' s Masters' record, or bettering Bobby Jones' major championship performance."

But Nicklaus was completely rational at the moment he made the statement, which was minutes after holing his final putt at Muirfield Village Golf Club on May 23, 1977. Nicklaus' statement wasn't that surprising to those who knew the depth of his involvement in the Muirfield/Memorial project and the dogged struggle he had waged to bring the dream to reality. They understood what he meant.

While he heaped success upon success on the links to gain recognition as the greatest player in golf history, Nicklaus suffered disappointment and frustration in his plans for a golf course of his own, and as he phrased it, for "bringing a major tournament to Columbus, the city of my birth." He had acquired what he considered a choice tract of land in Dublin, Ohio, in 1966, but construction didn't begin until July of 1972. A less resolute man might have tossed in the towel. But not Nicklaus.

He obviously had the long struggle in mind when he savored the Memorial with: "After we've worked so hard with this course and this tournament..." Not even the pesky thunderstorms that had forced an overnight delay in finishing the tournament could spoil this moment. Nicklaus originally debated whether or not to play in the Memorial. Since he designed the course and originated the tournament, he feared that, if he won, it might evoke unfavorable reaction, or have adverse impact on the event itself. Jack considered being merely a host, but associates and friends involved in the Memorial helped him to an early decision: to play. What's more, he'd give it his best shot(s).

"I've never played in a tournament I didn't want to win," he reminded. This would be no exception. Nicklaus didn't win the first Memorial; Roger Maltbie did (1976 review). He gave little indication in the 1977 first round that he would be literally presenting the unique Memorial trophy to himself on Sunday. His par 72 left him four strokes apace co-leaders Mark Lye and Bobby Wadkins (68's). Wadkins started 4-over in the first six holes, but set a tournament record 29 on the incoming nine (7 birdies). Jerry McGee, Gary Player, Bruce Lietzke and Chi Chi Rodriguez, at 70, were among 17 who broke par.

Nicklaus improved his position with a 68 (140) in the second round, but Player, hitting every green and avoiding a bogey, and McGee jumped into the lead with 68 each for 138. Fuzzy Zoeller soared to second with a tournament record-tying 67 for 139. In the third round, Wadkins resumed the lead with 69-209 and Nicklaus edged within one stroke by sinking a bunker shot on No. 18 for a 70. Lye stayed close with a 70-211, David Graham gained with a 68 for 212 and Tom Watson, Hubert Green and Player moved into contention.

On Sunday, Nicklaus holed one of his few long putts - 20 feet - on No. 2 and approached within two feet on No. 6 for another birdie that boosted him into the lead by two strokes. He had birdie chances at Nos. 1, 3 and 4. Wadkins had started bogey-par-bogey. But Nicklaus lost one stroke to sand trouble at No. 7 and another to a three-putt at No. 8 (his first of the week), Wadkins birdied No. 7. That's when, after three days of hot, sunny weather, a brief storm struck Muirfield (3 p.m.) delaying play for 20 minutes.

After action resumed, Wadkins double-bogeyed No. 9 to put Nicklaus back on top by two strokes. On No. 11, Jack's sand wedge stopped three feet from the pin for probable birdie, but as he said later, "I had about an hour to line that one up." Ominous storm clouds let loose at 4:10. With high winds, thunder, lightning and a curtain of rain sweeping the course, players and galleries scurried for cover. For almost an hour, they - along with the CBS-TV cameras - watched the torrent and wondered if even Muirfield's "Cadillac-type" drainage system could render the course playable again.

Standing water on the greens did cause further delay, but the players sloshed back to their marks at 6:30. Nicklaus sank his birdie putt but, Green birdied No. 13 to close within two strokes. Wadkins faded with a pair of bogeys. Nicklaus had to settle for par on No. 15. Green was forced to lay up, diminishing his chance to gain. Again (7:39) the clouds rolled in and the rains came, with Nicklaus on No. 16 tee and Green near No. 15 green. At 8:05, with ten players on the course, play was cancelled and a 9 a.m. Monday finish decreed.

With the coarse heavy with dew, Nicklaus parred in Monday for a 71-281 (he missed only one green in the final 18) and Green drew no closer, standing at (69) 283. Watson was at 285. "I'm never nervous before a golf tournament, "Nicklaus recalled later, ''but I was pretty nervous this morning. I really wanted to win very badly." He had one twinge on No. 18. His 3-iron from the fairway appeared headed for a huge tree that guarded the left of the green.

"I hit that tree in the last round last year and made six ," Nicklaus recalled. "Today, I said 'gosh, get over the tree' and fortunately it did."

Course builder/tournament founder Nicklaus now had his "biggest thrill;" he'd won the Memorial Tournament! Rather than detracting from the tournament, it lent a necessary helping of prestige. After all, as someone said, "what would a tournament be without Jack Nicklaus' name among its champions? The gallery around No. 18 green - about 2,000 compared to the estimated 30,000 before Sunday's rainout - accorded the hometown winner a standing ovation that lasted until Jack gave a final wave of recognition and disappeared into the scorer's tent.

"This is probably as hard a tournament for me to win as any I've ever played," he decided. "In my own mind, it was something harder for me to do than I thought I had the ability to do." It was his 63rd TOUR victory and the $50,000 prize money sent his earnings over the $3 million mark. His concern over the course and tournament didn't weigh as heavily as in the 1976 inaugural, but he still played with myriad distractions and pressures his rivals didn't carry - including hosting former President Ford for the Pro-Am. That he won under those conditions - only magnified the achievement.

Gratified as he was, Nicklaus confessed he was pleased to win the SECOND Memorial. "I'm kinda happy I didn't win the first one," he said.