View Scoreboard
Leaders
First Round â€“ Lanny Wadkins had a three-under 69 and led Mike McCullough by one. Second Round â€“ Tom Watsonâ€™s 69 gave him a two-under 142 and a four-stroke lead over Jack Nicklaus, Tom Kite and Peter Jacobsen. Third Round â€“ Watson held his four-stroke lead with a 214, while Miller Barber was at 218.
Notes

Weather: Thursday - Cool, windy day and some showers early in the day. Friday - Very cool, windy and rain most of the day. Saturday - Mostly cloudy, somewhat warmer and still windy. Sunday - Rain forced delay of start until 12:54 p.m., and both tees were used. 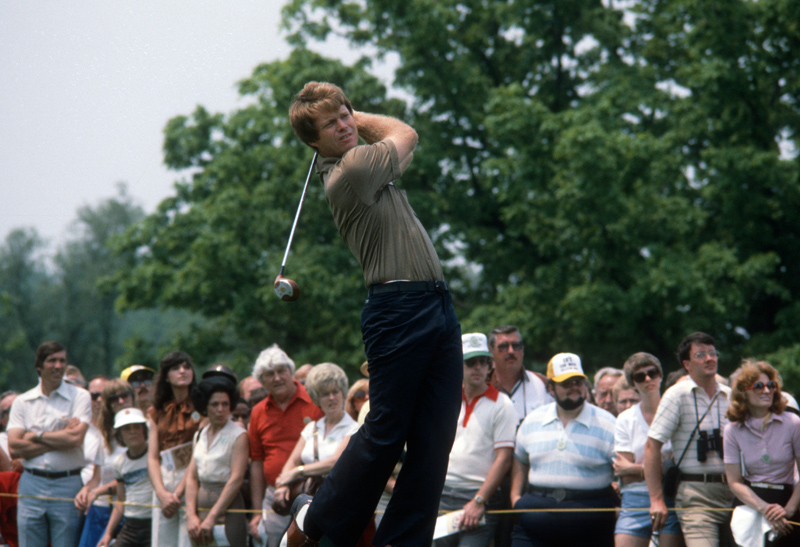 It was the kind of day Memorial Tournament officials wanted to forget quickly and completely. But eventual champion Tom Watson lent it an epochal quality. The weather on May 25, 1979 suggested an unwelcome prank: That some perverse force had transplanted the rain and cold and bluster from the original Muirfield in Scotland to Jack Nicklaus' namesake creation in Dublin, Ohio. And without the scenic Firth of Forth.

Steady rain from leaden skies, accompanied by winds gusting up to 30 mph and wind-chill factor that plummeted to 13 degrees, tormented Muirfield Village all through the second round. Bruce Lietzke, in his press interview afterward, made a special point of saluting the marshals, scoreboard and leader-board keepers and others for service beyond the call of duty in not abandoning their posts.

Lanny Wadkins had carved a 69 to lead the first round, played in drizzly, chilly weather. But he needed 10 strokes more on Friday (79) and that was the general trend. Forty-two of the 105 players who started failed to break 80 and one skidded into the 90's. Watson, dressed in a knit wool ski cap and sweater under a rain suit, seemed otherwise bewilderingly - at least to his rivals - unaware of the elements. He managed birdies at No. 5 with a 30-foot putt, at No. 8 with a 10-footer and No. 18 with an 8-foot-er. He missed only two greens, and never made a bogey. That 3-under par 69 amazed every one more than the fact he led the field by four strokes at 36 holes.

"It wasn't all that bad out there," Watson told the press later evoking laughter. I practice in Kansas City in this kind of weather all winter. I think my feet are frozen, but I kept my hands in my pockets and kept 'em warm. "I just didn't make many mistakes," he added-without media laughter. "I got off to a good start and held on for dear life."

At the time, Watson said the 69 was "one of the best, most satisfying rounds I've ever played." Discussing it later, he decided it was "one of the top three I ever played." But he also agreed it just might have been his best-ever. As time passed, the feat became more and more a marvel to pros and hardy souls who sloshed around Muirfield that day (and even to those who fled the weather - or didn't brave it at all).

Watson had more trouble in the first round. He had three bogeys in the first five holes and admitted "it looked like I was going to shoot 85." He steadied for a 73, but four back of Wadkins, who had birdied four of the first seven holes and holed a bunker shot on No. 17. Mike McCullough trailed at 70, with Ed Sneed and Mac McClendon at 71. Tom Kite said after the second round, "there was no way you could go out there and do good," but he eagled No. 14 and matched par 72 for a 146, tying with Nicklaus (73-73) and Peter Jacobsen (72-74) behind Watson. Miller Barber moved up with a 32 back nine for 74-147.

Commenting on the annoying weather, Nicklaus said he wore gloves and "I don't think I ever wore gloves in a tournament. By the time I reached 18, I had a hard time feeling the golf club." He must have had some touch, because he birdied the last two holes.

With the rain gone, Watson "salvaged a good round" on Saturday, maintaining his lead with a 72-214. He parked a 4-iron 18 inches from the cup for birdie on No. 17. Barber had consecutive bogeys on Nos. 7 and 8, but sprung another hot streak with birdies on No. 11, 13, 15, and 17. He might have caught Watson but he "got a little cute" with a 6-iron second on No. 18 and shanked it in the rough in front of the big scoreboard to the right of the green. He ended up double bogey and 71-218. He said he was all pumped up because he hit his approach inside Watson on No. 17, about four inches from the cup. But Barber shrugged philosophically. "If I hit it perfect every time, golf wouldn't be any fun."

Nicklaus charged up a huge gallery with three birdies in the first five holes, chopping Watson's lead to one, but four bogeys in five holes (9, 10, 12, 13) skidded him to an eventual 220 tie with Kite and Lon Hinkle. Craig Stadler, who had set a new course record 64 in the Pro-Am, tied the tournament single-round mark with a 67 - best of the first three rounds and matched only by Hale Irwin in the final round.

The weather improved the last two days, although rain delayed the start until noon on Sunday, necessitating tee-off on both nines. But sun finally broke through - and stayed. Tim Simpson, a last-minute addition to the field, provided a historic note for Memorial No. 4. His hole-in-one on the 204 yard 4th hole in the opening round was the first official (tournament) ace at Muirfield Village.