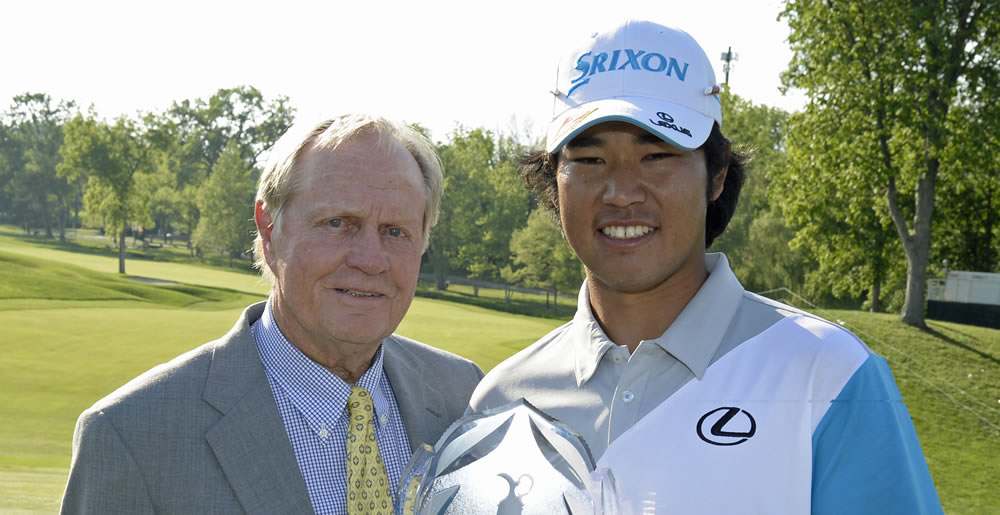 DUBLIN, Ohio (AP) - With every swing, Hideki Matsuyama appeared to join a cast of top players throwing away a chance to win the Memorial.

A tee shot in the water on the 16th for double bogey. An approach over the back of the green on the 17th that led to bogey. And then a drive to the right that made the Japanese star so disgusted that he lightly slammed his club into the turf, and the head of the driver broke off.

The ball hit a tree and took one last bounce back into the fairway, and Matsuyama seized on the break. He took dead aim with a 7-iron to just outside 5 feet for birdie on the 18th hole to force a playoff with Kevin Na, and then won for the first time in America with a 10-foot par putt on the first extra hole.

The 22-year-old Matsuyama earned validation as one of the game's bright young stars Sunday by closing with a 3-under 69 and making two clutch putts on the 18th hole for his sixth career victory, the previous five on the Japan Golf Tour. This was his first win against a field of the world's top players.

"I just think you've just seen the start of what's going to be truly one of your world's great players
over the next 10 to 15 years," tournament host Jack Nicklaus said.

Nicklaus spent much of the back nine in the broadcast booth, and it was a brand of golf that was unfamiliar to golf's greatest champion. The Memorial became only the latest event where proven players faltered badly.

Masters champion Bubba Watson had a one-shot lead with five holes to play. He was 3 over the rest of the way. Adam Scott, the No. 1 player in the world, was tied for the lead until playing the last seven holes in 4 over.

"The whole thing is frustrating as I stand here right now," Scott said after his 71. "But everyone is going to feel like that. We all could have done something different. If we all did, who knows what the result would be?"

Scott fell apart by hitting one shot into the water, taking two shots to get out of a bunker and losing all hope when his third shot to the par-5 15th hit the pin and caromed back into the fairway, leading to a bogey.

Watson dropped three shots by hooking two tee shots. The most damaging was his drive on the 15th that was so high, so powerful and so far right that it cleared the trees and went into a neighborhood, leading a double bogey.

Needing a birdie on the 18th, his shot looked good until it took one small hop and stayed in the rough. A few inches closer and it would have fed down the slope for a short birdie chance. He closed with a 72 and finished third, moving him to No. 3 in the world ahead of the injured Tiger Woods.

"It's tough," Watson said, who was going for his third win of the year. "I made one bad decision.

Na finished his round of 64 about two hours earlier. He was in the clubhouse at Muirfield Village, leaning against two pillows on a sofa as he watched the calamity unfold, even joking he might win by not hitting another shot. Thanks to Matsuyama, he had to. And it wasn't pretty.

Na hooked his tee shot on the 18th in the playoff, and it went into the creek. He still had 10 feet for bogey when Matsuyama made the winning putt. Na did not speak to reporters. A PGA TOUR official tracked him down in the parking lot, and he gave credit to Matsuyama for making a great putt.

Adding to the bizarre ending was how Matsuyama played the extra hole.

It was not an angry slam of the driver after his tee shot on the 18th in regulation, and he was shocked to see the head fall off. He could have replaced the club because the playoff is not considered part of the round, but he had no replacement. Instead, he went with 3-wood off the tee in the playoff, and it went into the front bunker.

He hooked his 5-iron, hitting a spectator in the knee left of the green, and hit a flop shot safely to
10 feet.

It was the first par he made on the 18th hole all week. Matsuyama became the first player to make birdie on the closing hole at Muirfield Village four straight rounds.

"To win my first PGA TOUR event is enough," Matsuyama said. "But to win it here at Mr.

Nicklaus' course, it really gives me a lot of confidence now going on. And hopefully, I'll be able to use this week as a stepping stone to further my career."

Matsuyama became the fourth Japanese player to win on the PGA TOUR, the most recent being Ryuji Imada in the 2008 AT&T Classic. The Memorial, even with Woods out with a back injury, featured the strongest field of the year outside the Masters, World Golf Championships and The Players Championship.