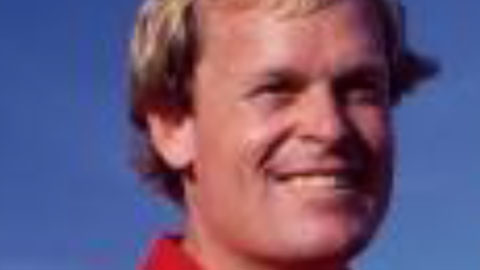 Johnny Miller, whose signature victory was his come-from-behind win in the 1973 U.S. Open at Oakmont Country Club near Pittsburgh, won 25 career PGA TOUR titles, which also included the 1976 British Open. He added three second-place finishes in the Masters Tournament, including 1975 when he dueled with Memorial Tournament Founder and Host Jack Nicklaus in a stirring back-nine finale that also featured another Ohio great, Tom Weiskopf.

A San Francisco native, Miller had a remarkable stretch of five victories in his first 11 starts of 1974 and he won 12 of his 25 titles in 1974-75. Framing that streak were his two major championship titles. At the 1973 U.S. Open, Miller trailed a quartet of players, including 1960 U.S. Open winner Arnold Palmer, by six shots going into the final round. He birdied his first four holes en route to a record 8-under-par 63 to beat John Schlee by one stroke and Weiskopf by two.

In the 1976 British Open at Royal Birkdale, Miller trailed a young Seve Ballesteros by two shots going into the final round but put together a brilliant 66 to win by six strokes.

His final win on the PGA TOUR came in 1994 at his favorite course, Pebble Beach.

Born on April 29, 1947, John Laurence Miller took up golf as a boy under the watchful eye of his father, Larry Miller. PGA teaching professional John Geertson was his first formal instructor, and Geertson, who also taught the late Tony Lema, shaped Miller's distinctive takeaway that featured an early wrist-cock. Miller received playing privileges at the Olympic Club in San Francisco in 1963, and the following year he won the U.S. Junior Amateur. As a 19-year-old amateur, he qualified for the 1966 U.S. Open at Olympic and finished in a tie for eighth place, thanks, in part, to his vast course knowledge.

Miller attended Brigham Young University starting in 1965, and after an All-American career and a win in the 1968 California State Amateur, he turned professional in 1969 at age 22. He nearly won the 1971 Masters, but he broke through later that year for his first title at the Southern Open Invitational, beating future PGA TOUR commissioner Deane Beman by five strokes.

After his victory at Oakmont, Miller partnered with Jack Nicklaus to win the 1973 World Cup. Ten years later, the duo would join forces again to win the 1983 Chrysler Team Championship. Miller also claimed wins on the European Tour and Japan Golf Tour.

Not long into his remarkable career, Miller started a family with his wife Linda that grew to include six children, and his focus and priorities shifted to them. One son, Andy, went on to earn his PGA TOUR card in 2003.

After his brilliant playing career–one shortened in part because of a series of injuries–Miller embarked on a career as a television analyst in 1990. In the quarter-century since, Miller has emerged as a household name in golf television, with popularity fueled by keen insight, his humor and spontaneity, and plainspoken observations. With multiple Emmy nominations, Miller is, to this generation of fans, perhaps known as much or more for being one of golf’s most acclaimed analysts as he is for a career that culminated with induction into the World Golf Hall of Fame in 1996.