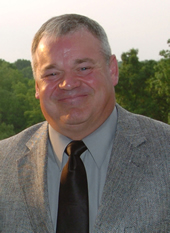 Thank you Beth, Mr. Sullivan, or whomever;

I would like to thank the Volunteer Committee for selecting me for this honor. And thank you, Beth for nominating me on behalf of the Scoring and Data volunteers. I would like to think that I am sharing this honor with my wife. She stands by me in working here and she affords me the time to help at Children's during the holidays.

I have been asked to speak to you about what Children's means to me and my family.
Let me begin by saying that my wife and I have two healthy grown children and that we as a family have only seen the inside of Children's once as a patient and a few times as visitors. We are very fortunate in that respect. Therefore, we do not personally have a compelling experience to recant to you. What I would like to do though is explain to you what compels me to be a volunteer and support Children's and Kinder Key.

I had an older brother that was born a "blue baby" and had a hole in his heart. As I have been told, my parents spent many days and perhaps weeks at the hospital with him during his surgeries and various procedures. He was never considered healthy but did lead a somewhat normal life. The hospital had an annual party for heart survivors and my brother happened to be one of the oldest. He passed away when I was nine at the age of 16. With medical bills strapping the budget, my father began making personal home visits as Santa to earn extra cash for the holidays. Shortly before my brother's death he began his visits to Children's as a volunteer. My mother soon joined him as Mrs. Claus.

As you are aware, the Kinder Key organization focuses on the heart area of the hospital and I am sure that was a natural fit for my parents to support them. This all transpired when I was a teen and young man. I didn't really pay much attention to it at the time. Shortly after I was married my father had a heart attack just before the holidays and needed someone to fill in for him. I had played Santa at a mall before and being of a similar stature as my father it seemed apparent that I take on the role. He resumed his duties the next year and continued for many more until the year 2000. Then I took over his role on a permanent basis and my mother continued.

I have never been so moved as I was in that first visit. I visited a darkened room of a terminally ill cancer patient. His mother was sitting quietly in the corner as I entered and I placed a gift next to the boy in his bed. He and I spoke, he smiled, and I left. His mother caught up with me in the hallway and told me that the boy hadn't smiled for weeks and she was extremely appreciative of my visit. That is the most rewarding compliment I could ever receive.

You see, I do the visits at Children's in hopes of bringing a little joy and some sense of normalcy to people that are in a not so normal situation. My favorite section is the NICU, Neonatal Intensive Care Unit. Where the youngest patients are and usually it is their first Christmas and first visit from Santa. The parents just light up and for a moment in time, some of the issues they and their child are dealing with seem to fade away. They don't care if their child is attached to tubes, IVs, or machines. It's Christmas and everyone is excited to see Santa. It is amazing to watch the staff take the time and care to get the patient ready for Santa to hold them and get a picture. I always hope that this will be the first of many Santa photos but realize that this may be the only Santa picture this family gets with that child and between the staff and volunteers, we try to make it a memorable one. Speaking of the hospital staff and volunteers, what I do is very limited. They work daily to help make the hospital a better place for the patients. Moreover, they round up the gifts, wrap them, and make sure that they are appropriate for the age and gender of the patient. They really do a wonderful job.

I also enjoy visiting the heart patients, because if you did not know, some of these patients are teenagers and adults. You know that group of people that may have lost the ability to believe in Santa. However, they still want to get a picture with Santa and enjoy receiving the gifts that are provided. I actually visit them twice because the Kinder Key organization provides gifts earlier in December for the heart ward as well.

And that's how I came to be a volunteer at the Tournament, through the Kinder Key organization. Kinder Key is nice enough to invite Mr. and Mrs. Claus and our spouses to their annual luncheon. I no longer go just for the food. I also get to listen to the hospital heart doctor's talk about new technologies and treatments that they are using. There are other presentations and announcements as well. This is where I heard they needed volunteers. I told them that I would like to help. The first year my wife and I worked the 13th fairway and we really enjoyed ourselves. Since then, we have gotten our son and a friend to help out on Saturdays and we cover the first fairway and green. I have a little more vacation time than my wife does. Therefore, I take the whole week off and work the other days with a friend of mine from work. This year I have to pass on being available on Sunday as we have nieces and nephews graduating from high school and want to share in their accomplishments.

I was really astonished to hear from Beth that I was to be honored as the Volunteer of the Year. I do not even think of this as volunteering. I don't think you're supposed to get compensated when you volunteer. What I mean is; I get to see great golf and golfers from inside the ropes. You all know that if you work enough hours you get a pass for the whole week. I always make it to the pro-am to get a few pictures of my favorite golfers. And yes, Mr. Nicklaus is one of my favorites. Even though my father never golfed, he always made it a point to see the Golden Bear on television and point him out to the rest of the family. I have gotten several good photos of Mr. Nicklaus here at Muirfield.

I would like once again to thank the Scoring and Data Control Chair for nominating me. I also would like to thank the Kinder Key organization for allowing me to help through them. I would like to thank my parents for starting me down this path, and most of all my own family, particularly my wife. They allow me to leave them during the holidays so that others may share in a special moment. It is really a privilege to be here tonight and to be a part of an organization that has given so much to Children's. Realizing that Children's Hospital wouldn't be what is it is today without groups like this and functions like the tournament. Thank you for allowing me the opportunity to give to Children's.