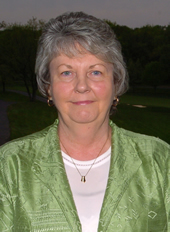 I want to begin by thanking Sue Zerkle, Concession Chair, and to the Women's Committee for honoring me with Volunteer of the Year 2008. And of course, I would like to thank the Memorial Tournament for providing the opportunity and a venue where people like me can volunteer to raise money for Children's Hospital.

My family and I have been volunteering at the Tournament since 1988. I became more involved when I became a member of Twig SW8 in 1991. I had the privilege of serving on the Women's Committee as Assistant Chair ('99-'00) and Chair ('01-'02) of Concessions for four years and again in 2006 as Concession Advisor. Since my time with the Women's Committee, I have returned to my position as a Stand Captain during the tournament.

As a lifelong resident of Columbus my family and I have seen Children's Hospital grow and change over the last 60 years. When my husband was a child, he was hit by a car and had to stay in Children's during his recovery. He also had an older brother who had polio when they were young.

My most extensive and recent experience with the hospital came when my youngest Grandchild, Austin, was born in 2001 with Spinal Muscular Atrophy (SMA). He was diagnosed at Children's just weeks before his 1st Birthday. SMA is a genetic neuromuscular disease where your muscles don't work like they should and they grow weaker as they age.

Due to his respiratory weakness, Austin battled with pneumonia at the slightest onset of a cold. His first hospital stay came when he was just 17 months old. His Daddy was overseas in Kosovo with the Army. The hospital staff worked with the Red Cross to bring him home. It took 2.5 days for him to arrive.

He had a wonderful Pulmonologist, Dr. Elizabeth Allen, who spent countless hours with him and advising his parents on how to best care for him. We are forever grateful for her patience, understanding and compassion.

Another area of the hospital whose doctors and staff cared for Austin was the Physical Medicine department. Dr. Rosalind Batley took great care in prescribing Austin's wheelchairs and braces to enable him much of the freedom he enjoyed.

He had a number of stays in the hospital during his short 4 years. He loved the nurses on the Respiratory floor and loved to talk with them once he was feeling up to it. They enjoyed his silly sense of humor and the nurses always made his stay in the hospital more bearable.

The last area of the hospital I feel it is important to mention is the Hospice Department. To say these people are special doesn't even begin to describe them. It's an area that is extremely difficult to acknowledge that families could need, but we did and we will be eternally grateful for all the guidance and love we received.

If you had the opportunity to meet Austin, you could easily see why I have enjoyed all that time I have given to the hospital. He received so many benefits from Children's. We all did, really. He was a bright and cheerful little boy and we had a close relationship. I spent many hours sitting with him at the hospital. Even at home when he needed something if I wasn't right there with him, he would call out for me by saying, "Mimi, I need you!"

After Austin died, I thought about slowing down and just when I think I'm going to, I hear his little voice saying, "Mimi, I need you!" and I realize that even though he is in Heaven, there are still others that need us to keep going and keep helping.

In closing, I would again like to thank all the members of the committee, all the wonderful volunteers I have worked with over the years and of course Nationwide Children's Hospital for their continued excellence as one of the premier health care facilities in Ohio and America.