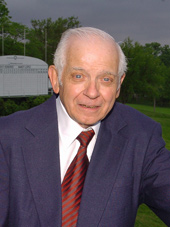 Tom Fleming has volunteered for 8 years (this will mark his 9th). He started working on the course at the Status Boards until he was "promoted" (his words) to the Press Room.

Tom Fleming started volunteering due to 3 reasons... his love of golf, Jack Nicklaus and in support of the Nationwide Children's hospital- the place that cared for saved his grandson's life.

Tom has always loved the game of golf although he has never played. Growing up, his family didn't have much and golf was the sport of the "rich families". Today, Tom follows the sport weekly. He watches whichever tournament is being telecast that week plus keeps up on where/what the PGA's best players are.

Tom has always respected Jack Nicklaus and kept up on his career and followed the Memorial on TV from his home in North Canton, Ohio. To him, jack was a "real down-to-earth guy who had done good."

Tom and his grandson, Ryan, are a "team" - before and during Ryan's illness, continuing even today! It was poetic that the two of them volunteered together from the beginning, whether on the boards or in the Press Room. Tom had always thought you had to live in Columbus to volunteer; when he learned that wasn't the case, he and Ryan signed up and they haven't missed a tournament yet!

Tom takes his volunteering very seriously - he feels that one number being placed incorrectly or if the wrong color is used could create incorrect information being reported to the public. Every September, he begins asking his daughter, Michele Joseph when the date for Volunteer Registration is set for in January to ensure Michele has marked time off on her calendar to register him as soon as the website opens. He doesn't have a computer and knows that the spaces are limited in the Press Room. He wants to ensure he gets his days/times because he can't "let the girls down".

The Memorial Tournament is a commitment he won't miss as long as he's able; several years ago, he had rotator cuff surgery. His goal in therapy was to get his arm in shape so he would be ready for the tournament - missing 1 year wasn't an option for him.

"What makes him a good candidate for Volunteer-of-the-Year?" It's because he embodies the essence of the Tournament from all aspects - he is self-less, enjoys the sport of golf, respects the history of the Tournament and its impact on Dublin/Columbus/the state of Ohio, has a passion to giving back to Nationwide Children's Hospital and understands the impact his good work has on the contribution made yearly from the Tournament to the hospital. He doesn't talk a lot about his volunteerism but the pride he feels is evident - his 5-year pin is on his Volunteer shirt every day during the tournament and he will be there for "his girls" every day they need him.